Good morning everyone, and happy Thursday!! Schoolwork tends to get pretty crazy at the mid-week point so I'm sorry I missed you all yesterday. I'm back today with two of Hard Candy's iconic blue shades, Hick and Sky. I call these shades iconic because they were two of the company's most popular shades and when I think of Hard Candy, these are a couple of the shades that immediately come to mind. Blue was one of Hard Candy's signature shades and they did quite a few good ones. Another one of my favorite Hard Candy blues is Manic, which I swatched here a while back: Hard Candy Manic.

First up is Hard Candy Hick, which I believe came out sometime around 1998. There used to be this amazing old Hard Candy reference site but it was recently taken down so a lot of these dates are from memory. Anyways, Hick is a fantastic periwinkle blue with silver glitter. The glitter is not gritty and all, and it dries to a very smooth finish.

Hick was one of the original shades that made it into the big, flat bottles when Hard Candy was bought by LVMH and the line got a huge overhaul in 2001 and most of the old shades went down the drain. That's another reason why Hick was so iconic is because it stood the test of time when the majority of the old Hard Candy shades were discontinued. 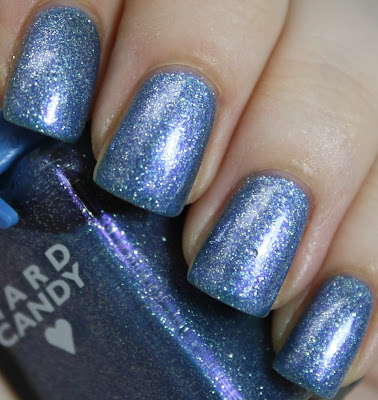 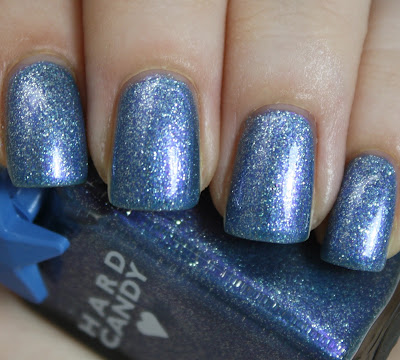 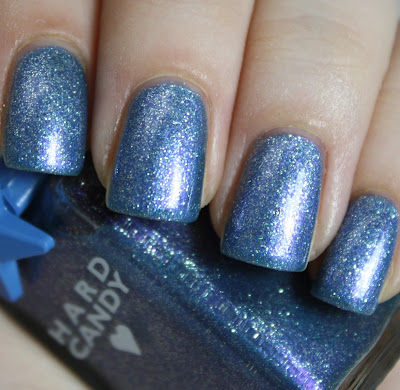 Next up is Hard Candy Sky, the nail polish that started it all. Sky is a simple sky blue cream that has a teeny hint of blue shimmer but it was so subtle that I couldn't even capture it in pictures. You just have to believe that it is there. Application was pretty meh, pretty runny and hard to keep from flooding my cuticles but that seems to be the standard for these vintage Hard Candy cremes.

Sky was created in Hard Candy creator Dineh Mohajer's dorm room in 1995 by mixing a few polish colors together to get the perfect shade of baby blue to match her sandals. People went absolutely gaga for it, and when she brought a few bottles to Fred Segal to sell, they sold immediately and the brand Hard Candy was born. When Alicia Silverstone showed up on David Letterman wearing Sky nail polish in 1995, the brand absolutely exploded in popularity and Dineh began selling Hard Candy at retailers such as Nordstrom, Saks Fifth Avenue, Neiman Marcus and Sephora. Hard Candy grew to have a huge cult following and was beloved by teenagers, fashionistas and celebrities alike.

Sky is the only color that has been seen in every single Hard Candy line, inlcuding the Wal-Mart reincarnation. It is THE color of Hard Candy and is the reason why it became so popular in the 90s. I have three different versions of Hard Candy Sky in my stash but I have chosen to show you the original one today. 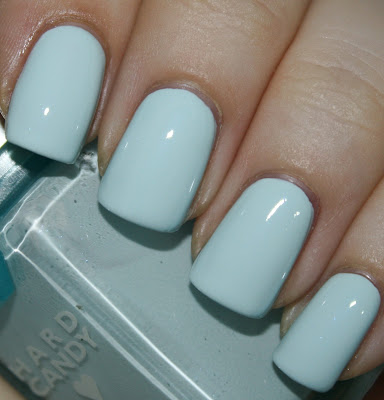 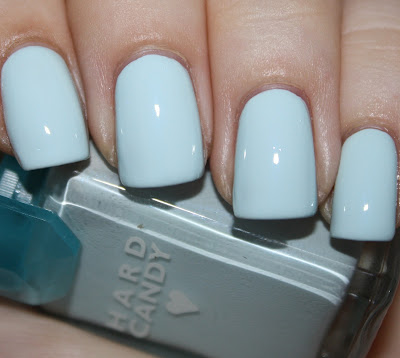 Hope you've all enjoyed today's vintage shades of Hard Candy! Thanks for stopping by and I will see you tomorrow with more history lessons, I mean vintage Hard Candy swatches!
Posted by Jacqui of The Scholarly Nail at 8:59 AM